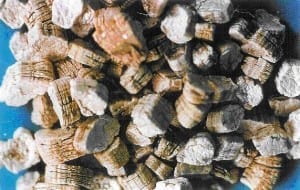 Vermiculite, a naturally occurring mineral, was mined and processed in Libby, Montana, from the early 1920s until 1990. This vermiculite, which was shipped to many locations around the United States for processing, contained asbestos.

At the Texas Vermiculite Company/W.R. Grace site in Dallas, Texas, more than 396,900 tons of asbestos-contaminated vermiculite were shipped to that location and a facility at the site expanded vermiculite using an exfoliation process. Commercial exfoliation of vermiculite is a process of heating uniformly graded pieces of vermiculite in a furnace to expand or “pop” it into lightweight nuggets.

Expanded vermiculite had excellent insulation properties and was widely used for attic insulation, among other uses, during the second half of the 20th Century.

The Dallas vermiculite facility operated from 1953 to 1992. The buildings at the plant were demolished in the early 2000s.  A residential neighborhood is within a quarter mile of the former vermiculite expansion plant. Thousands of people lived within a mile of the facility while it was still in operation.

While the facility was operating, workers at the facility and members of their households were exposed to asbestos from the processing and handling of asbestos-contaminated vermiculite and waste rock.

Neighborhood residents could have been exposed to asbestos from the plant operations either from the manufacturing operations themselves or from stockpiles of asbestos-laden vermiculite on the property.

The vacant property most likely no longer poses a health threat to the community. However, individuals that lived in the neighborhood before 1992 should be aware that they may have experienced environmental exposures to asbestos from the facility and should mention this potential exposure when during routine medical check-ups.

The Agency for Toxic Substances & Disease Registry (ATSDR) has conducted an extensive review of the Dallas expansion plant.   In the mid-2000s, health screenings were conducted at Parkland Hospital for west Dallas residents who lived near the W.R. Grace facility prior to 1992.  Radiology for a number of individuals found evidence of asbestosis.  If you lived, worked or attended school near the Texas Vermiculite/W.R. Grace vermiculite plant in west Dallas prior to 1992, you should consult your physician concerning regular screenings for potential asbestos related illnesses.

Dallas asbestos lawyer, Ben DuBose, was among several people who spoke with West Dallas residents at community meetings shortly after the Parkland health screenings.  “I was asked by the Dallas Bar Association to speak at an informational meeting for community residents about the health risks posed by asbestos exposure.   Not everyone exposed to asbestos develops an asbestos disease, but exposure does increase the risk of such disease.   Sadly, the people living in the shadow of this vermiculite plant had no idea it was spewing out asbestos fiber into their neighborhood.”

Ben DuBose has over twenty years of asbestos and serious personal injury litigation experience, successfully fighting for hundreds of mesothelioma victims in courts throughout the United States